Captain Charles Martell was the first recorded patient in North America to be diagnosed with what was considered the rare condition of hyperparathyroidism. The year was 1926.

Patients are the primary knowledge keepers of their conditions and that they should be seen as indispensable, equal collaborators in pursuing the cause of medical research  ” for their own benefit and that of others”.

The Case of  Charles Martell and Ward 4 –

So just how far have we come? Sadly, much of the language used to describe Charles’ early experiences sounds eerily similar to what patients’ experience today….

“He was investigated for years”.

” … it was a rare medical condition”.

“Nonetheless it was not until 1926 ( 7 years) that he would meet a physician who named his suffering.”

While much has been learned about hyperparathyroid disease over the last nine decades there is still much work to be done!

There are still strikingly different levels of understanding among medical professionals about this disease that isn’t so “rare”. As many physicians still seem to believe that it is, they often do not consider primary hyperparathyroidism as the root cause of patients’ symptoms (ie. brain fog, osteoporosis or kidney stones, to name a few).  Experts, on the other hand,  estimate that 1 in 50 women over the age of 50 have primary hyperparathyroid disease. (i.e., 2 % of this large population.)

Exploratory surgeries are still commonly performed, even though we know that there are better ways to go about surgically caring for patients.

Patients still lose their jobs or abandon their careers.

It is estimated that patients go undiagnosed on average, 8 years – no better track record than poor Charles.

1) Most people have never heard of their parathyroid glands nor are they aware of their critical function of regulating calcium in our bodies.

2) Although patients are treated for many of the debilitating symptoms of hyperparathyroidism for years, the root cause goes undiagnosed.

3) Patients, and too often medical professionals, are not familiar with ALL of the debilitating symptoms of the disease which can delay diagnosis.

4) Within the medical community, there is a lack of understanding as to the various biochemical presentations of hyperparathyroidism. Medical professional also may confuse whether hyperparathyroidism is Primary – resulting from one or more noncancerous adenomas, Secondary to another medical condition or Familial (FHH) /hyperplasia. Note: The majority of patients whose calcium is high have Primary hyperparathyroidism, which can be surgically cured.

5) There is no consistent standard for what the normal, age-dependent range of serum calcium should be. Experts concur that mature adults generally have calcium values in the mid 9’s and hyperparathyroid disease should be suspected if values are 10.1 or above.

Read more about our Action Plan. 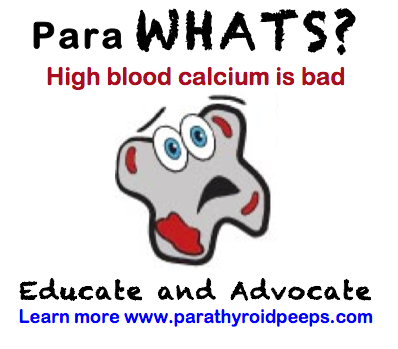